An entertaining ride with fun action and performances, Extraction might just be enough to satisfy your hunger for new films. It's worth watching, but what holds it back from being a really good

As new movies aren’t currently coming to theaters, streaming service originals and straight to VOD films seem to be our only option. Probably the biggest streaming original release so far is Netflix’s Extraction. Starring Chris Hemsworth and produced by Avengers: Endgame directors Joe and Anthony Russo, based on an original graphic novel by Ande Parks and the Russo brothers. It seems to be a big hit for the service, as I know a ton of people have watched it already, and it’s currently holding the number one spot on Netflix.

An entertaining ride with fun action and performances, Extraction might just be enough to satisfy your hunger for new films. It’s worth watching, but what holds it back from being a really good film?

Before we get into that, of course we’ll talk about what works with the movie, starting with the cast. Chris Hemsworth gives a great performance full of emotion that shows how smart and experienced his character, Tyler, is. I have to admit I was very impressed with young actor Rudhraksh Jaiswal as Ovi Mahajan, the teen Tyler is sent to rescue. He is able to show a lot of emotion as well through the role. I also love seeing David Harbour pop up, even if he’s only in the film for about five minutes.

Aside from the cast, what really works is the characters and the action. We’ve already discussed how emotional the characters are because of the cast, but Tyler and Ovi are really written well and have good written chemistry. The action is really solid throughout, well choreographed, and well shot, but what really stood out to me is the 12 minute long one-shot scene. It’s easily my favorite scene in the movie, as I am a sucker for one-shot scenes, as I’m sure most people are. This one in particular is very smooth, which is hard to pull off as we move from cars, through buildings, and off of balconies. I liked the ending too, both our final scene with Tyler and the very last scene, but although we’re teased, I don’t believe it will actually lead to anything.

Moving on to what doesn’t work as well, the rest of the cast doesn’t really stand out that well. I’ve seen some people really enjoy Randeep Hooda’s character, but to be completely honest, he didn’t do anything revolutionary with his performance to me. He’s just sort of doing what he can with the script. That’s another thing: the script by Joe Russo isn’t that fantastic. It’s not bad, it’s just not great. The plot is a little basic, and nothing except the very end really surprises you. I am interested in reading the graphic novel to see how they compare. The set pieces are very bland unfortunately. I’d say there isn’t one set piece that stands out besides maybe the bridge, but even then, it just isn’t that memorable or interesting. I think that’s something a lot of action films such as this one tend to struggle with. Another thing they tend to struggle with is exhaustive action scenes, which this movie has. As well choreographed and entertaining as a lot of them are, there can’t help but be some scenes that drag on. You know an action scene has really dragged on when I’m simply just bored watching it.

In conclusion, Extraction is an entertaining, fresh film to give us all something new to watch in quarantine. With really strong, emotional performances from Chris Hemsworth and Rudhraksh Jaiswal, and fun action, it’s worth a watch. Yet it can’t help itself from falling into the trap of other action films with drug on action scenes, boring set pieces, and just an okay script. 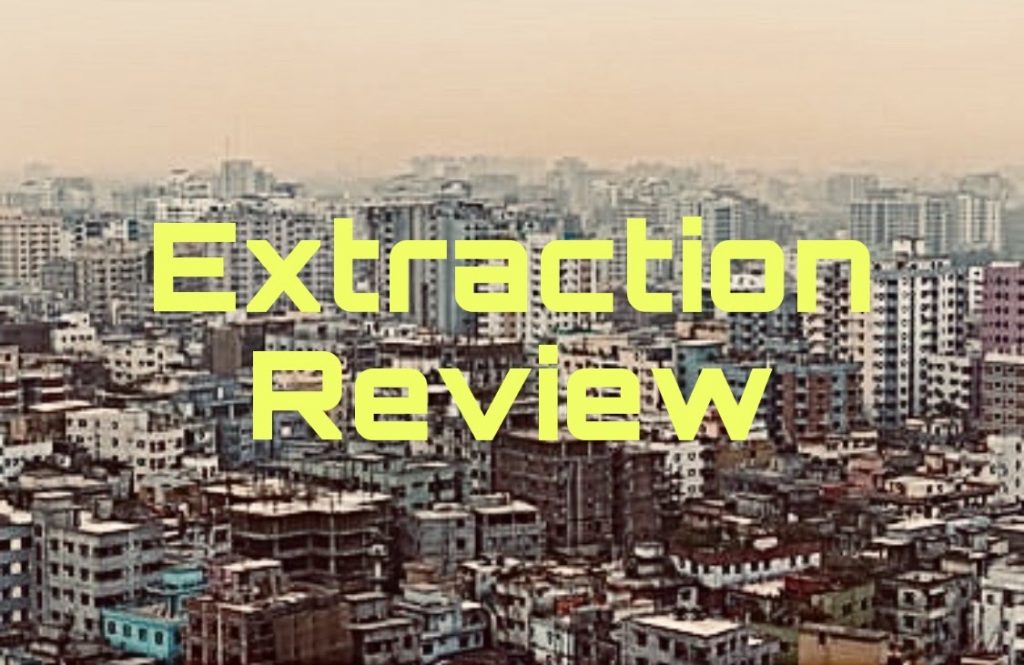